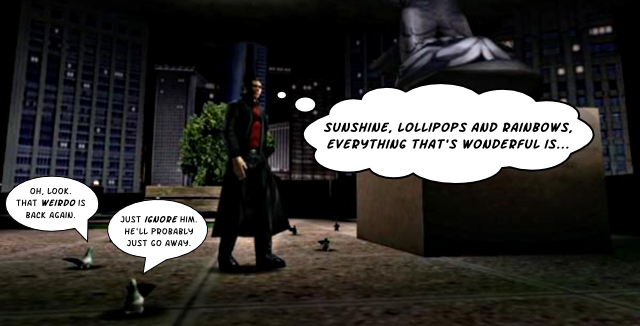 The Illusion of Choice…

Several months ago on a whim I plunged through a bargain-bin of old videogame titles and found a copy of Invisible War. I’d never played it. When it came out, I was broke. When I got an XBOX there were other more highly rated titles to play that hadn’t been panned so vehemently. But 6 years after its release and another Deus Ex title nearing completion – Deus Ex: Human Revolution – I decided to find out for myself what kind of game it really was. and for A$8 it’s not like I’d regret having handed over A$120 for it; I’d still feel my money was well spent and, it most certainly was ;).

To sum it up: it’s not a bad game, it has it’s good aspects, but, fails to live up to the original. It’s a fairly solid execution of a sci-fi action RPG, if, unspectacular.

I wouldn’t rate it in the 90s and putting it in the 80 percentile range would be contentious, but the 70s is where it belongs. That said, I’ve played worse games, worse RPGs than this one; it also looks good for an XBOX title and far better than the original game. If it didn’t have the baggage of being a sequel to a critically acclaimed “Game of the Year” title, then it would have been exactly what it is: an interesting entertaining game with promise, but fundamentally, flawed.

How is it flawed in my opinion I hear you all ask? Well, let me then add my own analysis of this title to the plethora of arm-chair game design opinionists out there who have already given their “2 cents” on this subject many moons ago. And I warn you, this might be a bit of a slow start as this is the first of a six part series here… self-induced-coma, indeed!

Now the first time I played Deus Ex was actually back in 2002, but around 2 years ago, I started playing it on and off again. So the game to me isn’t that stagnant a memory that’s been warped through rose-tinted glasses to grandiose proportions of being the most perfect dystopian cyberpunk RPG ever created. As it is rabidly for some.

So let me first say this: Deus Ex is not the bestest game in the entire universe.

Do I think it didn’t deserve “Game of the Year” and high scores in the 90 range. Of course not. It’s a great game that’s still a lot of fun to play today as long as you can get past it’s shortcomings; it is after all a flawed game just like Invisible War is, for largely different reasons is all, and the dated graphics makes these far more apparent.

For instance, much is made of the nonlinear gameplay, and yes, it does play a part to it’s success. However a piss-poor “arcade-shooter” (Quake 3 / Unreal) styled AI, which due to its inherit nature, fundamentally ends up undermining player choice. Along with a reliance on a dated RPG skill and experience system – especially for weapons – for “balancing” gameplay. And large environments, that are a plus since they help create a somewhat “open-world” living and breathing atmosphere, however at the same time is a minus, in that the architecture is not conducive to action / stealth gameplay which is made more pronounced due to the lacking game systems (like stealth mechanics) and AI. The net result of which is gameplay being solved in usually one flavour: “stealth” by sniping at enemies from afar.

Well… these things are shortcomings and go against the claims made about the title. At least for gameplay.

And even the one viable “choice” you are provided with is limited in Deus Ex’s case. Yes, you can try to sneak stealthily around and attack from the shadows, however, the dated skills system in lieu of well developed systems (mechanics) not to mention a half-decent AI. Will result in most outcomes playing out pretty much the same with limited scope for any real sense of tactics – part and parcel of creating (modeling) “action” gameplay.

Whether you fight with your fists, a sword, an axe, a hammer, arrows or magic. The result is pretty much the same. Monster sees you either because you charged at it, shot at it or casted a spell at it. It charges you in turn, along with its nearby buddies, and attacks you. Each party exchanges attacks which vary in effectiveness due to your respective RPG stats, rank, random (“rolled”) numbers, etc; and eventually someone drops dead.

You might claim that there is some variance between a swordfighter and magic user, but really, there ain’t; the swordfighter can always use disposable items like spell scrolls and potions – or use an enchanted item like a sword or armour – to “cast” their own magic just like both of these can also learn to use a bow or utilise magic in order to be “stealthy” and sneak past enemies. The outcomes lack any real dynamic diversity derived from tactics.

In my opinion, this is due to a poor AI and a reliance on a dated RPG system in lieu of more progressive alternatives. Usually in the name of gameplay or “fun” over realism, which is absurd to me and usually nothing more than an excuse. A better response would be:

“Yes, we could have taken a more progressive approach, however, based on the RPG genre and market, we can get away with not having to do that because ultimately it is the story that will drive our gameplay.”

However, I’m afraid that Deus Ex and Invisible War cannot make such a claim, at least, not entirely. That’s due to it being an action RPG, not straight-up, old-school fantasy dungeon-crawler RPG set in an “open” world. 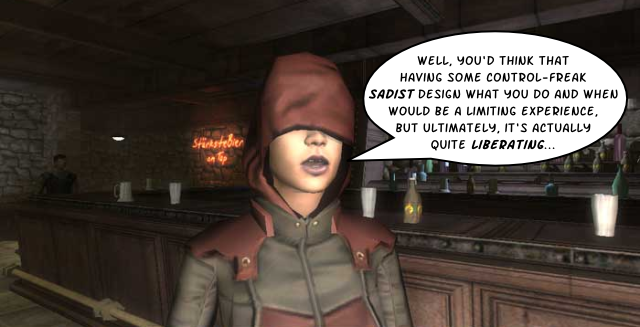 It’s All a Matter of Experience…

A classic driver of an RPG is earning experience points (XP). In Deus Ex completing a mission in a certain way and/or completing an optional objective, would reward you with differing amounts of XP. Not in Invisible War which had a set amount of XP as reward no matter how you ultimately finished a mission.

With this “variance” gone in Invisible War there is no practical reason for you to complete all objectives, or, kill every enemy. Sure you can do it in order to get a sense of satisfaction from doing so; to feel that you’ve completed that level / mission to 100% completion, but, you won’t get any reward for doing so; except for limited cases were enemies will drop items for you to use – weapons, ammo and grenades.

But this isn’t the case for all enemies, like bots, where destroying one won’t get you any reward. It won’t get you anything other than a wasted EMP grenade. There is no battery to salvage here, no exotic ammo like a rocket to add to your stockpile – actually, the game only had the one “universal” ammo type, which I’ll get to later.

So, why go to the trouble of doing so, if, you’re not adequately rewarded for doing so?

In Deus Ex a mission usually didn’t just have one goal but had a range of preceding goals (objectives) in order to complete that goal, that mission. Quite often these are only found out whilst in the middle of completing a mission:

It’s a bad example on my part but it does show that a mission is usually much more involving, more complex in Deus Ex than it is in Invisible War.

Invisible War usually had the one objective per mission. Sure, each has multiple ways of achieving that particular objective, but as said, choice really boils down to you picking one from a few options with progressing levels of (questionable) reward for yourself. Also, this feels rather simple. Straightforward. There’s nothing calculated here in way of risk vs reward required from the player, or, any required strategy in way of which objectives to complete in what order and how depending on the player’s play-style.

An example is the Inclinator facility mission, where you have to get past the bots and clean up the spill in order to progress with the story. There is a range of ways of how to go about doing this, but honestly, they don’t differ all that much beyond some eating more into your end reward than others.

The worst option I discovered upon completing the objective – well, second worst – played out as follows:

“Going through an ill hidden vent (tunnel) allowing the possibility of bypassing one haywire bot but still having to take out another. Took me to the door to the area affected with the chemical spill – green gas. I then run across to a room I can see on the other side. It’s locked however. For some reason I could have headed for a stairwell down, but, didn’t feel compelled to. I use a multi-tool to unlock the door whilst using up a few medikits so as to not drop dead from the gas, and, I’m in. This frees a repair bot which then proceeds to replenish my energy – not health ?! – levels and then goes on out to fix a broken bot that then scrubs clean the air of the green gas…”

Objective completed. It wasn’t terribly hard to do, but, it wasn’t the best way to do it. For instance, going down the stairs would have provided me with the locked door’s passcode from the maintenance guy. There were others that would have cost me less (or, rewarded me with more), but, nothing compelled me to do so. That’s not a bad thing but having only one objective to complete how you wished for a mission, resulted in a less than engrossing and challenging mission.

There’s also only one effective way to complete an objective in Invisible War in regards to rewards. All the rest, vary in how less of a reward you are going to get. Like 100 creds plus a multi-tool, or, 100 creds minus a multi-tool; which is actually better than the third option which also “rewards” you with a major hit to your health – which will result in minus 2-3 medikits to recover the lost health.

That’s not much of a nonlinear, solve the problem how you want, choice there. What’s more, it fails to maximise the gameplay usage of this nonlinear space as Deus Ex does.

A memorable example of this when replaying the first title is a certain facility that you must gain entry to. You are now public enemy number one. It is a large nonlinear space, with multiple ways into the facility, like via sewers and a secret underground entrance with a puzzle of a security network to breach. Via the heavily guarded main entrance. A less guarded but more technologically secure side entrance. And, a method of gaining access via the roof via an adjoining building – it’s guarded, but, not as hard to progress through; just more longer and tedious if not a good chance to get more XP and items.

There are a number of objectives to complete in order to complete the mission, each objective, has a number of ways of being completed. It’s difficult, it’s convoluted, but, ultimately rewarding. Gamers may “complain” when something is difficult but remove it as in the case of Invisible War, and, you remove the challenge that they want to have and need to have to feel satisfied with the immersive experience of your title.

They want a challenge to overcome and best. They want compelling gameplay. Invisible War not providing this only resulted in players complaining how easy it was and how it had been “dumbed down” (for console) from its predecessor.