With it being a while since my last blog, and, my planned blog taking longer than I’d like. I’ve decided to do an impulsive riff based on a news post I read recently on Tsumea. The post, is an interesting read, but, fails to miss some key points I feel in it’s analysis of the situation; that being, the rapid march of “mobile” and social gaming and rise of the indie game developer, and, what’s in store in the future for (local) developers.

So, here’s my take on this…

When the iPhone first came out, you could release any old rubbish as an app, and, it would sell. It was a funky new toy that was lacking in content. Quite simply, people were happy to pay anything for anything as long as it made use of the iPhone’s touch-screen and accelerometer – not to mention the other aspects, like, wireless internet / GPS.

These early success stories, of lone developers using the spare time to code a basic app via the development tools supplied by Apple, and making an easy half a million or more by doing so. Attracted many that wanted to emulate such success for themselves. The market become flooded with apps. Most of these apps were dubious in quality and worth; and with the novelty of the iPhone having worn somewhat thin for owners, they weren’t in a rush to spend their money on apps for the platform. They still bought apps, but, they had come to expect more from these apps.

The new burgeoning digital app marketplace had started to grow-up, and, rapidly so.

To many, digital distribution and social media, had created a new golden era for independent game developers. They thought and even claimed, that things had changed for good. However, this is an illusion. In many ways, this “new” golden era is merely an echo of the past, of the independent development days passed. Except, things are much more compressed, like a time-lapse recording of two decades only taking a brief two years to complete a cycle of.

We’ve already had our (8-bit era) lone-bedroom-coder days, and we’ve progressed rapidly through the (16-bit era) team-of-mates startup days in regards to expectations of production quality and it’s required resources to achieve it. Now I think we’ve largely moved beyond this, to (32-bit era) projects requiring substantial resources and funding – titles for the iPhone like GTA Chinatown Wars.

You can’t just release any old crap any more, and, expect to pay off your mortgage.

Don’t get me wrong, there’s always been “indies” and there will always be “indies.” It’s just that it’s only been relatively recently that indie game development could be your main source of income. Staying that way, has now become harder, but, not impossible to achieve. There’ll always be scope for a lone-developer to come up with something original, a novel experience that hits all the right spots in people’s psyche – like Canabalt.

Something that an inspired lone developer with a yearning to create something different, unknowingly creates in a weekend a title that resonates with so many around the globe.

Scope for such (8-bit) developments, to make a livelihood via some digital marketplace niche, like social (Facebook) gaming and the like. And who knows what avenues will appear in the future, like ARGs – that is if you as a staunch game developer, can get the “transmedia” folk, to let you play in their digital playgrounds.

Digital distribution is here to stay, and social media / tools allow developers to work together yet not have to share the same physical space – groups of individual developers (or small studios) can come together to develop a project, virtually. Technology and tools like Unity 3 engine and UDK, provide developers an ease-of-entry into producing content for the various platforms – PC, Mac, Web, iOS, Android and X360 Arcade.

In the short- to mid-term, the hardware of these various platforms, and the operating systems running the apps on them, will increase in performance. Providing developers with more to play with, and in some ways but not all, increasing the end-user expectations and demands of consumers. Though to a degree, these development technologies and production tools with provide greater ease-of-development for future platforms. They will still inherently require more in the way of the quality of gaming experience provided to players in return for their investment of time and dollars.

Leading to greater complexity in the development concepts we envisage, and higher production values, in the end delivered titles for these digital markets and platforms.

Especially with moves to make such digital marketplaces far more “closed,” adding additional pressures to deliver stronger concepts implemented to a higher level of quality – requiring more sophistication in development know-how. Android though currently far more open than iOS platforms, may not remain this way once it reaches it’s own critical mass of applications, platforms and market-share; regardless, we have already had the novelty of apps ware-out via the iPhone.

Quite simply, people aren’t going to buy any old app like they did for the iPhone for an Android phone (or tablet); they’ll expect a higher level of quality for their dollars. 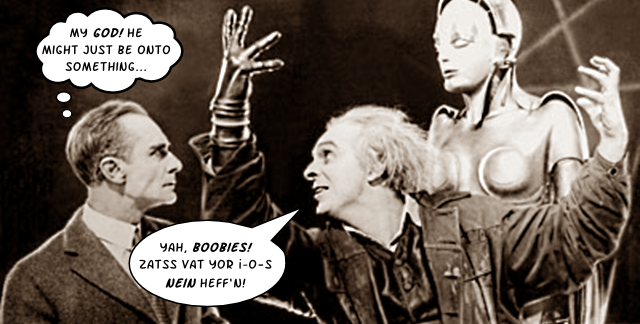 Towards a New Paradigm…

One of the keys of digital distribution, has always been, viral marketing via online social media. Some developers – actually, I’d argue that most if not all successful app developers – have realised just how important this facet of being an indie game developer, actually is. If you’re an aspiring indie developer and you don’t now much about viral (or Guerilla) marketing, then you better start learning the basics or find someone who actually does that isn’t talking out of their arse and willing to offer their assistance.

Though, it’s not an entirely new phenomenon, it’s been around in one form or another for a while now, so, you should be able to find ample sources via the web to get you started off.

However, an element of “marketing ” that isn’t well understood – beyond that it is a process started from day one – that I want to drive home, is doing your (ongoing) research to ensure your title achieves it’s various aims (like generating a net profit). First by doing the upfront research to see whether your concept actually has a chance to sell in the targeted digital marketplace, based upon, it’s projected characteristics and where the market will be when the game is penciled-in for release. You also can’t develop in a vacuum, so, you need to periodically check to see how your development fits into the context of this marketplace, and whether, things need to be changed and steered back on course for success – just don’t take everything you read at face value; dig deeper!

Finally, you generally can’t market rubbish, and, expect it to sell. Hype has the potential to make a novel but not quite there idea, sell. But blatant junk is junk.

Another aspect (or hurdle) for indie game developers, is funding. As the many independent low-budget genre filmmaker has learnt, you don’t need a “huge” budget in order to make a successful film that is well liked by critics and/or actually makes a net profit. Some concepts will require more in way of resources and therefore, funding. Why low-budget filmmakers usually don’t attempt something like Avatar on a string-budget.

Some concepts will require more from you in way of skill and experience – not quite having it, means the quality will suffer unless you stretch out the title’s development schedule, incurring greater costs. That said, high production values fuelled by a consistent passionate (and achievable if ambitious) vision, with a knowledgeable clue or two – that, and the odd bit of fortuitous luck-of-timing doesn’t hurt as well – can be a more decisive factor in whether a title will be a success of some kind or not.

Good development and production principles, can generally be applied to any project, no matter what the budget!

Having marketing and funding (resources) taken care of, is all well and good. But unless you can create a strong concept to develop, no amount of marketing and funding will make up for this deficiency. This is where some kind of development methodology or framework can comes into play, however, the alternatives in this regard are rather limited with Agile being portrayed as some kind of “silver bullet” for game development’s issues when it comes to developing a strong concept to market.

Personally, I strongly disagree with this reasoning in that what works about it is what works with every iterative development methodology out there.

The claims it makes, are consistently being debunked in software development – especially XP. Game development however, is a bit slow on this uptake. Not that agile methodologies – like Scrum (project management) and Crystal Clear – don’t have their merits. They do, but, it’s questionable how beneficial these practises are in light of very the “customer-centric” (fee-for-service) and “code-driven” (functional-software) natures of agile development.

“Quality” and “originality” isn’t exactly what comes to mind when I think of Agile.

Regardless of its merits, unless you have a solid knowledge base in way of game design, and practical experience in implementing this in game development. Or someone who can provide the project with this. Agile isn’t going to be that much of a help to you I’m afraid, in that it cannot provide these for you. However, I think that the research that I am doing into a Concept Development Framework, just might.

Having such a “framework” in place, is the difference between a developer creating a game like Wolfenstein 3D, with it’s FPS mechanics poorly fitted to a platform and market like the iPhone, when what the platform really needs from the developer, is for them to instead create an original mix of: first-person, turn-based, story-driven action RPG gameplay as found in Wolfenstein RPG. At least that’s the plan.

To illustrate it’s use and it’s effectiveness, I’ll be using the framework to develop an indie show case title with – tentatively called: DigiZen.

Of course if my showcase title fails to deliver the goods, I guess I’ll be eating my words – though, it may just prove that I’m just not very good at following and taking my own advice, not, that the advice itself is unsound. I have a hunch or two about what will work and how to go about doing it. I like to think I have the vision and passion to bring it to life. I guess time will or won’t vindicate me as being right.

Lastly I leave you with the following advice…

In a world where we have very little conscious effect upon the persistent forward march of time, I can only state the following with relative certainty: Nothing lasts forever!